Fall Out Boy Pete Wentz used the t-shirt to make a statement about Coltan and the Congo at the NME awards. Coltain is a metallic ore that is used to produce elements niobium and tantalum. The tantalum is used in electronics including cell phones, DVD players and computers. Coltan has helped fuel and fund war in Congo that has resulted in over 5 million deaths since 1998. The smuggling and resulting deaths have been of similar issue to the blood diamond. 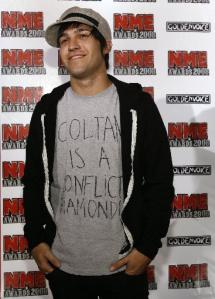 ← No Longer Taboo, Custom T-Shirts Appropriate In More Places than You’d Guess
Support and Remember Loved Ones with a T-Shirt this Memorial Day →
Scroll Up