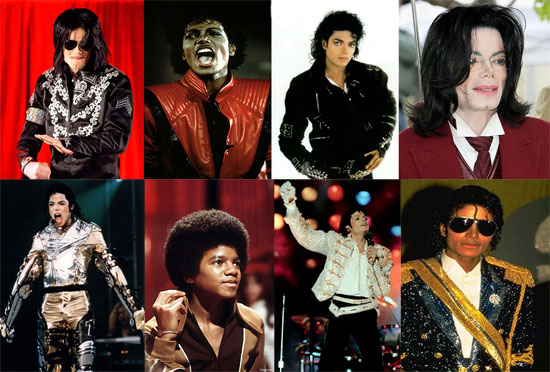 Michael Jackson’s untimely death has reminded the world of his many contributions to music as well as to fashion. Though Michael Jackson is gone, his music and his style will live on.

In the 80s there were several looks that Michael Jackson created and introduced to his legions of fans. One of his most iconic looks was the red leather jacket with black diagonal lines that formed a V-shape in the front. The jacket was worn with matching red pants and black loafers. This outfit can be copied by choosing a loose red leather jacket and wearing it with red pants that match the jacket as closely as possible.

In the 90s, he became known for his long black jackets and matching black pants. Unlike the loose red jacket, the black jackets were worn in a form-fitting cut that fit tightly on the arms. The jackets often had some military styling such as large gold buttons down the front, epaulets or military-style scrolling embroidered at the cuffs. Other black jackets had black sequined details.

A black fedora was often worn with the outfits, particularly with the black and white outfits. For an outfit that instantly recognizable as Michael Jackson’s style, wear a black or red jacket with black pants and black shoes. Air the outfit with a black fedora with a white band around it.

In the 80s, Michael Jackson earned himself the nickname “The Gloved One” because of his trend-setting single glove. To get the look of his glove, wear a glove on the right hand. The glove should be white with lots of rhinestones or silver sequins on it to give it some sparkle. His stage gloves had sparkles only on the back side of the glove to make it easier to hold a microphone while his appearance gloves had sparkles all the way around. Either type will evoke the style of Michael Jackson.

← Are T-Shirts With Leather Jackets Fashionable?
Tie One On: What Color Tie to Wear →
Scroll Up