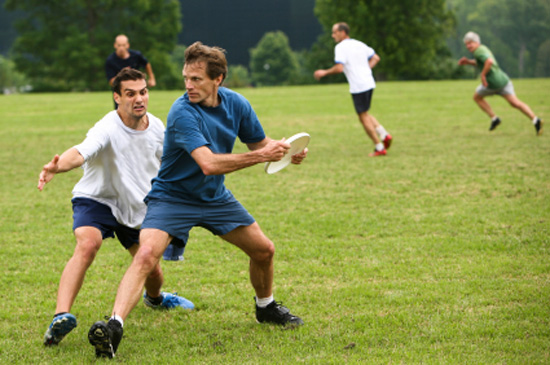 If you like American football but could do without the tackling, hitting, cursing and all-around violence of the sport, then Ultimate Frisbee might just be your game. Actually, Ultimate might be your game, since that has become the sport’s official name. The change was made to avoid trademark infringement on the Frisbee™ line of flying discs manufactured by the Wham-O toy company. Ultimate has become widely popular for its unique rules and strong spirit of sportsmanship and respect, and is currently played by millions around the world.

Ultimate originated in 1968 with a group of high school students in Columbia, New Jersey, who adapted the game from Frisbee football. Some of the Columbia students later established Ultimate clubs when they went to study at college, and clubs and associations continued to sprout throughout the country during the 1970’s and 80’s. Currently, there are an estimated five million players worldwide. According to the Ultimate Players Association, Ultimate is defined as a “Player defined and controlled non-contact team sport played with a flying disc on a playing surface with end zones in which all actions are governed by the ‘Spirit of the Game.’”

Similar to American football, the goal of Ultimate is to pass a disc to a team member in the opposing end zone. The trick is you can’t run with the disc; throws may only be done from a standing position. Games may be played outdoors or on indoor football fields, etc. One of the unique aspect of Ultimate is that it does not utilize referees or other officials to ensure fair play of the game. The players themselves officiate, and any actions such as fighting, taunting, intentional fouls and other negative behaviors are not allowed, which is why it is enjoyed by so many people. There’s an overall feeling of just playing for the joy of playing, minus all the drama.

A typical Ultimate game is played to 15 points and lasts roughly an hour and a half, so it’s essential to dress for comfort. Loose t-shirts are perfect, along with shorts of a length that hits just above the knee. Because of all the running, jumping and lunging involved with Ultimate, wearing short shorts (or anything that you can’t bend, twist or run in without revealing too much skin) would become an embarrassing fashion faux pas. Always bring a light and a dark t-shirt when playing pickup games because many times teams are not determined until shortly before play.

Footwear for Ultimate is an even more important consideration. It needs to have lots of traction, so choose shoes with cleats or a similar tread pattern. Check out football or soccer cleats that are made for positions that require fast, nimble movements, such as the If you regularly play on a hard, dry surface (turf vs. natural grass), then shoes with cushioning are also a good idea. Inserts are available to ease the shock of Ultimate play.

If you are interested in becoming involved in Ultimate, most cities offer Ultimate leagues and pick up games that are open to new players. To find where to play in your area, visit the Ultimate Players Association website at  www.upa.org.