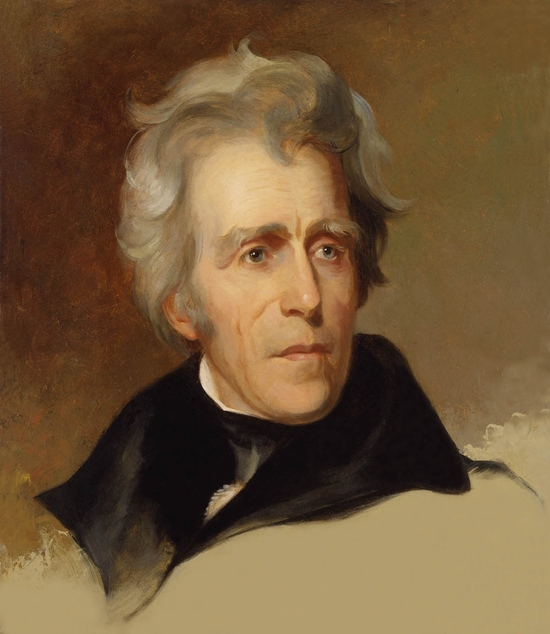 Andrew Jackson served as the seventh President of the United States and held office for two terms, from 1829 to 1837. Born in South Carolina in 1767, he is considered one of the few presidents that have ever been elected to office by an overwhelming popular vote.

Jackson’s history is distinctly American. Born in the woods of South Carolina, he was basically self-taught. As a young man, he practiced law in Tennessee, though he also had the reputation of a ‘wild man’, engaging in brawls and duels. He is even known to have killed one man in a duel after the man offended his wife. A proud, noble man, Jackson lived near Hermitage, Tennessee, and was the first man elected to the House of Representatives from that state.

Nicknamed ‘Old Hickory’, Jackson was known to be unbending when it came to concepts of honor, loyalty and dedication. He felt that governmental duties were ‘so plain and simple’ that official positions should easily be filled by the common man, and not self-declared politicians. During elections for his second term as President, Jackson won a 56% vote from the American public.

Andrew Jackson is remembered as a president who said what he thought, and such a concept as ‘politically correct’ behavior is something he would have laughed at. Jackson was a man of his word, and everyone knew where he or she stood with him. His popularity was a constant during his years in the Oval Office, and even his opponents could not fault him for his moral stand and respected him for his tenacity.

Inhabitants of his native state of Tennessee celebrate Andrew Jackson Day on March 15th every year. It’s an official holiday in that state, but in no others, which serves to show the affection Tennesseans have for their former son. Born in the backwoods of America, he, like Abraham Lincoln, who later followed him in public service as a lawyer and political candidate, followed his heart and did what he felt was right and just in the eyes of the American people. At the age of fourteen, Jackson fought and was wounded in the Revolutionary War. He became a national hero during the War of 1812, and was the first president to hail from the western side of the Appalachian Mountains.

Millions of Americans celebrate the life and times of this unique president. Not only in Tennessee, but also throughout the nation, as well as those in Washington D.C. celebrate the life of this great and popular president. Visitors from around the country are able to take Andrew Jackson tours and find a multitude of items pertaining to this most favored of American presidents, from paintings to documents to statues. Jackson’s home in Hermitage, Tennessee, is the focal point of travelers from around the country, and is one of the better-preserved early American homes in the United States. Visitors to New Orleans can visit monuments to battles Jackson led in that area during the War of 1812, and visitors to the White House can find the Southern Magnolia tree he planted in honor of his wife. Is remembered as the first president to actually pay off the national debt and actually leave office with a surplice of money in the U.S. Treasury! As president, Jackson expanded both the power and reputation of the office and carried out reforms and exercised his power of veto on more than one occasion. Tennesseans celebrate Andrew Jackson day every year with birthday parties that they fondly call, “Happy Birthday to Old Hickory” events, where southern food and entertainments are in plentiful supply.

America’s office of the Presidency has seen many colorful presidents, but none quite so colorful as Andrew Jackson. His rough and tumble ways seem to personify the American spirit, even in such a prestigious setting, but Jackson wasn’t a man who cared much for doing things the ‘correct’ way; he was more worried about what was right, and followed his convictions to the end.

← What Is Administrative Professionals Week
What To Wear Boating →
Scroll Up