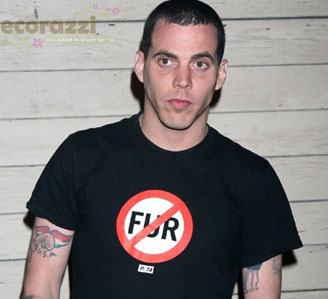 Jackass star Steve-O was spotted at the Maxim Hopt 100 Party in Hollywood wearing an unmistakable anti-fur t-shirt. The PETA shirt has a giant red circle with a line through the word fur. Check out the PETA store for more anti-fur products. [Image Credit: © Krista Kennell via: Ecorazzi]