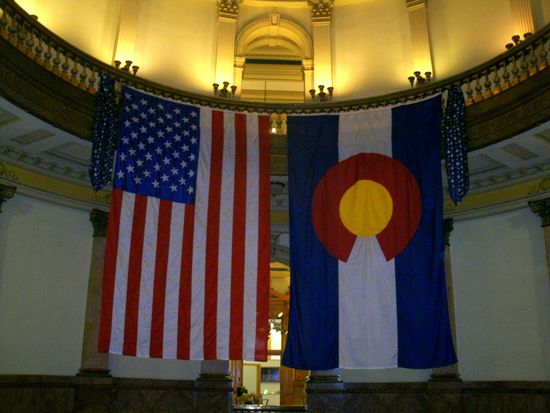 Colorado Day celebrates the admission of the Colorado Territory into the United States in 1876, thereby giving it the nickname, ‘The Centennial State’, one that has lasted to this day. Nicknames seem to be a favorite for Colorado, whose state capitol, Denver, is also know that the ‘Mile High City’, since the elevation of Denver is more than a mile above sea level.

Instituted as a part of the United States in August of 1876, the western state that is known for its cowboys, cattle ranches, gorgeous mountain vistas and rolling plains, is a favorite travel spot for Americans every year. The 38th state to enter the Union, Colorado brings with it a history of Indian wars, determined settlers and ranchers, gunslingers and rodeos. The colorful, purple Rocky Mountain Columbine has been designated at its state flower and the Lark Bunting its favorite bird. A variety of landscapes, and weather patterns, make Colorado a treasured tourist destination for millions of Americans around the country.

Spanish explorer Francisco Coronado traveled through the southwestern portion of the state in 1541, and the area incorporating the eastern part of Colorado and many other states were purchased through the Louisiana Purchase in 1803. The Treaty of Hidalgo, offered by Mexico to the United States in 1848, brought the western portion of modern day Colorado to the United States, and then in 1850, the government purchased former claims by Texas on Colorado lands. The first non-Native American Indian settlements in Colorado were begun in the early 1850’s, but Colorado’s Pike’s Peak Gold Rush of the later part of that decade saw the infusion of thousands of gold seekers flocking to Colorado’s Rocky Mountains in search of gold and silver.

St. Charles, now known as Denver, became one of Colorado’s first cities, followed by settlements throughout the state, from the plains of the eastern slope, over the Rocky Mountain peaks to the western slope, adobes and flatlands of western Colorado. Colorado is the Spanish word for ‘colored red’, and her red-tinted earth proved a fitting name for the isolated land in the middle of the Great Plains. The state flag symbolizes the beauty of Colorado, from the gold designating her abundant sunshine to the white, which represents her almost perpetually snow-capped mountains, while the blue serves as a reminder of her unbelievable blue skies. The red represents her earth.

Colorado’s history is rich in Native American cultures and traditions, and traditional customs and events share a part of Colorado’s rich heritage. Colorado is also known for its hunting seasons and wilderness that offer pristine mountains, meadows and experiences for native Coloradans and visitors alike. Colorado is a land of great diversity and change, and has grown exponentially since its official birth, offering natives and transplanted citizens alike a wealth of opportunity. Mostly agricultural, Colorado is quickly stepping forward into the 21st century with an influx of technology and job opportunities that will enable the state to both grow and remain rich in her unique heritage as an ‘old western’ state, where old blends with new and life still maintains an even, laid-back pace.

Colorado Day is celebrated in typical western tradition, with rodeos, fairs, and civic community events that host dances, festivals and any event that brings good, clean fun to its inhabitants. Colorado has enjoyed a lustrous history that is perpetuated by her reputation as a true ‘western’ state, one that personifies the heritage of the American cowboy and way of life. Every Colorado Day is an event to be celebrated and honored, and for native Coloradoans, is a day of extreme pride and enjoyment reflecting the American Spirit.