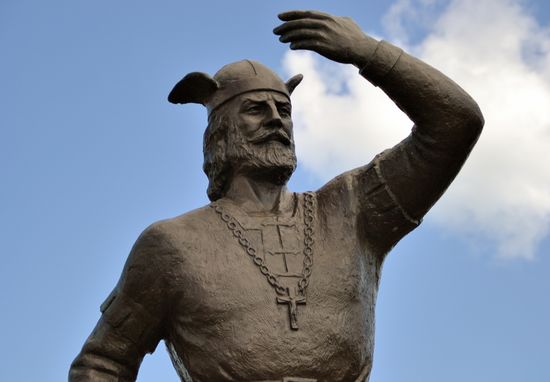 Leif Erikson Day? Yes, this day is set aside every October 9th to celebrate the life of the man who first stepped foot on what was to become known as the United States of America. Leif Erikson, also known as the son of Erik the Red, was a Norseman who discovered American soil in 1002 A.D, almost six hundred years before Columbus. Leif Erikson hailed from Iceland, he and a handful of Norsemen are believed to have set sail from Greenland to land at various spots along the eastern seaboard of the New World centuries before any other explorer.

Leif Erikson carried on the traditions of Norsemen who braved stormy oceans and explored vast seas just like his Viking ancestors in Norway and Iceland. Some believe that Leif and his crewmates made landfall along the coast of Newfoundland and ventured as far south as Cape Cod, where he and his men spent a cold winter in temporary lodgings that they build and called Vineland.

Historic evidence supports this story; despite the fact that neither Leif nor his co-travelers created maps or left any other evidence other than the lodging and a shelter that was made to protect his boat from the harsh American winter, archaeological evidence supports the legend of Leif’s voyage. Recent discoveries of lodgings have been unearthed in Newfoundland in an area around L’Anse-aux-Meadows. While Leif never returned to American shores, there is historical evidence supports knowledge that his brother did, though Native Americans later killed him.

Leif Erikson personified qualities that Americans hold in high esteem: bravery, daring and an unending quest for knowledge, understanding and adventure. Such an indomitable spirit is inbred in Americans hearts across the country, and it’s natural that Americans would honor such a man, especially Nordic American descendants of such a noble breed of explorer. On September 2, 1964, a joint resolution of Congress designated October 9th as a day to celebrate and honor the legacy of such a man. President Lyndon B. Johnson began what was to become an annual proclamation to pay tribute to Leif Erikson’s strength of spirit and discovery.

So why did Congress choose October 9th as the day to celebrate Leif Erikson Day? Not because of anything Leif did. Actually, that particular day was chosen because it was the date that one of the first ships carrying immigrants from Norway landed in New York Harbor in 1825. It seems fitting that such an event, followed over eight hundred years after their ancestor first stepped foot on American soil, be dedicated to the memory of such an explorer.

Many citizens of the upper Midwest celebrate this day. Thousands of immigrants of Nordic descent settled in Wisconsin and Minnesota, and in 1930, Wisconsin was one of the first states in the Union to officially adopt the national holiday. In 1963, U.S. Representative Blatnik introduced a bill in congress to mark the day as a national holiday, and the following year, Congress voted in unanimous favor of the resolution.

Oddly enough, Leif Erikson Day and the celebration of Columbus Day land in the same month, and Columbus Day often overshadows the explorations and discoveries of Leif Erikson, except by those large Nordic populations that have settled in Wisconsin and Minnesota. Though Leif Erickson day is a nationally recognized day, it’s not a holiday that American citizens actually take off from work and celebrate. While many Americans of Nordic descent remember and honor their courageous ancestor and schedule school events and small parties to memorialize the man, such is done without party decorations that are more commonly found when celebrating major holidays like Thanksgiving.

← What’s The Blarney Stone
When Is Law Day →
Scroll Up