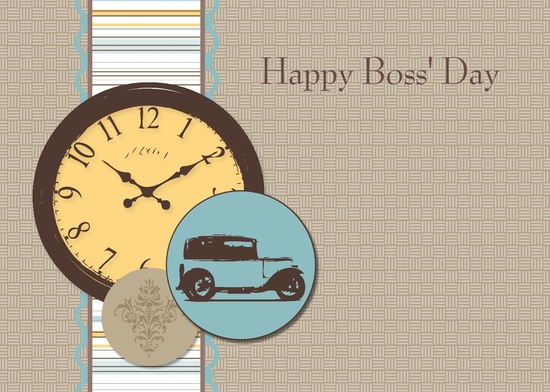 Celebrating Your Boss on Boss Day!

Be honest. How many people actually like their bosses? Actually, millions of employees around America love and adore their bosses! So, when recognition is offered for secretaries, legal assistants, parents, fathers, mothers and grandparents, why not the boss?

National Boss Day is officially observed every October 16th. If that date happens to fall on a weekend, then the day is celebrated on the working day that is closest to the 16th. The intention of the day was meant as a way for employees to show due appreciation for their bosses and supervisors in whatever occupation or industry an employee works in. For many employees, that means offering the ‘boss-man’ a card or a verbal note of approval, but for others, it’s a time to throw a party or to treat the boss and other management staff to a brunch or buffet planned at work, or even to bestow gifts.

The event first started back in the late 1950s when a State Farm Insurance employee named Patricia Haroski officially registered the holiday with the United States Chamber of Commerce. She wanted to show public recognition and appreciation for her boss and also hoped to help improve the relationship between other local employees and their bosses by encouraging employees to understand the particular difficulties and challenges that a boss faces on a day-to-day basis. She chose that particular day because it was also her father’s birthday, and since he was such a great boss himself, it seemed natural that Boss Day should also fall on his birthday.

As with many other American holidays and days of recognition, it took a while for the word to spread around Patricia’s state, then surrounding states, before it crossed the country. Today, every state recognizes Boss Day, and every year sees more and more employees appreciating their bosses and the work they do. Of course, American card companies began to create and produce Boss Day greeting cards, and today, two of America’s favorites, Hallmark and American Greetings, offer dozens of cards to present a boss serious, humorous or heartfelt offerings of thanks, appreciation and support.

Today’s bosses have come a long way since the 1940s and 1950s. Bosses today are a little less willing to demand certain skills and tasks from their employees and instead offer skills development and decision making courses which encourage employees to take an active participation in the running of their business. Laws that have been passed protect both employees and employers from abuse and unreasonable demands and the basic rights to equal pay for equal work. In many companies, bosses work alongside and support their employees, offering not only monetary rewards for work performed, but also emotional support as well. While some bosses don’t fit this description, and never will, most American bosses recognize and realize that if it were not for their employees, they would not have a business. Most bosses appreciate the skills and efforts of their employees, and vice versa.

When asked, most employees state that the most satisfaction they get from a specific job is directly related to their relationship with their employer. On Boss Day, employees are able to express their gratitude or appreciation for great bosses, and for those that have not met the mark, the day serves as a learning process for the betterment of employer-employee relations.

National Boss Day can be celebrated with a card or a nod of thanks. Appreciation can be shown with a handshake or a hug, a smile or a handwritten note on a scrap of paper. No matter where Americans work, there is almost always a ‘boss-man’ to answer to. So go ahead, tell your boss what you really think of him. After all, National Boss Day gives employees the freedom to do just that.