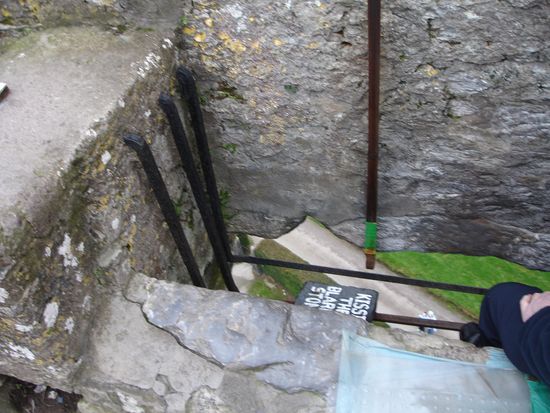 The traditions of the Irish people are steeped in rich history, and have added many interesting customs and sayings to American culture. The phrase “Kiss me, I’m Irish,” one of the most popular T-shirt slogans on St. Patrick’s Day, is a fun example of Irish tradition rooted in history.

“Kiss me, I’m Irish” is closely related to the legend of the Blarney Stone. This world-famous attraction is found at the Blarney Castle, located near the Irish village of Blarney and the city of Cork. According to legend, one who kisses the stone will receive the gift of eloquent speech, or the “gift of gab”. More than a quarter-million people come to kiss the Blarney Stone each year, likely making it the world’s most unhygienic landmark!

Today’s Blarney Castle was constructed in 1446, but the history of the Blarney Stone begins long before that time. One legend says it was the rock Moses struck with his staff to give water to the Israelites as they wandered in the desert following their exodus from Egypt. Another claims the stone is Jacob’s Pillow, referred to in Genesis 28. Yet another tale says the stone was the coronation stone of Scottish monarchs and later brought to Ireland by missionaries.

A more widely accepted story about the Blarney Stone is that it was a gift to Cormac McCarthy, King of Munster, from Robert the Bruce. McCarthy had helped the Scots defeat the English in the Battle of Bannockburn in 1314. The stone was incorporated into Cormac McCarthy’s fortress, Blarney Castle, and became known as the Blarney Stone. More than a century later, one of Cormac’s descendants, King Dermot McCarthy, installed the stone in an enlarged castle that he constructed.

The practice of kissing the Blarney Stone is linked to another local legend, that of an old woman who was saved from drowning by a king of Munster. As a reward, she cast a spell that if he would kiss a stone on the castle’s top, he would gain speech that would win over all who heard it.

Because of its difficult location in a wall below the battlements at the top of the castle, kissing the Blarney Stone requires a bit of gymnastic ability. Participants were once dangled by their ankles from the edge of the castle walk, resulting in many tragedies. Modern guiderails and protective crossbars have since been installed, but the ritual still requires some courage. You must first sit with your back to the stone wall while someone sits on your legs or grips your feet. Next, leaning backward and down into the gap while grasping two iron rails, you slowly lower yourself until your head is even with the stone.

Just how long the practice of kissing the Blarney Stone has gone on is not known, but for the Irish it’s a fun way to get attention. Anyone with even a hint of Irish blood believes he or she has the luck of the Blarney Stone on St. Patrick’s Day, so “Kiss me, I’m Irish” has become another aspect of the celebration. After all, isn’t kissing a Irish hottie better than kissing a dirty stone?