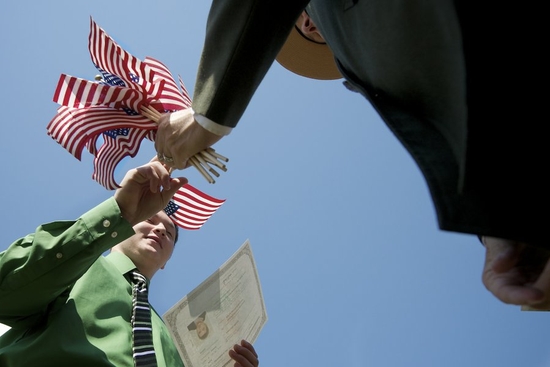 Every September 17th, thousands of people from across the nation take a pledge to become United States citizens. The day is officially called Citizenship Day and marks an important moment for immigrants from around the world as a day when they become Americans, as well as a day for native born Americans to remember and celebrate our rights and responsibilities as free citizens of one of the greatest nations in the world.

September 17th is the day the United States Constitution was signed in 1787, and is a day that is also observed to honor our Founding Fathers and the freedoms to which every American citizen has been granted. Citizenship is the mortar that holds our nation together, and in the heart of every American beats the nature of a free man, one who is able to reach any goals or aspirations they seek regardless of race, faith or social status. Hundreds of thousands of people from around the world immigrate to America to enjoy the same freedom and possibilities, and citizenship naturalization ceremonies take place all across the United States on Citizenship Day as these very same people raise their right hands and swear to an oath of allegiance to the United States of America.

Citizenship Day has been celebrated since the early 1940’s, when President Harry S. Truman signed a resolution created by Congress that designated the third Sunday of every May as, “I am an American Day”. In 1952, he signed a subsequent bill that designated September 17th as a day to be observed by all Americans. He felt it was especially important for all citizens to learn and understand the rights granted to every American through the Constitution and to honor the principles that proved the foundation for our country.

When immigrants want to become officially recognized as American citizens, they must begin a long process of learning and understanding. When they’re ready, they are given tests that show their interest and their knowledge of basic events in American history and also of how the United States government is designed and how it works. A naturalization ceremony is usually held in every state on September 17th, and immigrants from every town, city, and county appear in Federal court or civil immigration services offices throughout the country to take the Oath of Allegiance. The ceremony offers these immigrants, no matter where they’re from, as true American citizens with the rights of native-born Americans, full citizenship, and its benefits.

Over a million immigrants have already become American citizens in the first years of the 21st century. It’s not only meant to be a day for those who want to become citizens of the United States, it’s also a day in which every native born American should pause for a moment or two, at the very least, to recognize how fortunate they are to belong to such a country that guarantees rights and freedoms to her citizens. Many Americans take these freedoms and rights for granted, which is why many schools around the country use the date as an opportunity to explain to students what the Constitution of the United States is, what it says, and what it means, to young people everywhere. It’s a time when both children and adults can appreciate the unique freedoms enjoyed in our country that are not approved or allowed in other countries around the world. The spirit of freedom beats strong in the heart of all Americans, to those of newly granted citizenship and those who come from Mayflower stock. Whether new or old, American citizenship offers people of all races, creeds, beliefs and social backgrounds equal rights and freedoms that are never to be taken for granted.

← What Is Cancer Control Month
Automatic T-Shirt Printers →
Scroll Up