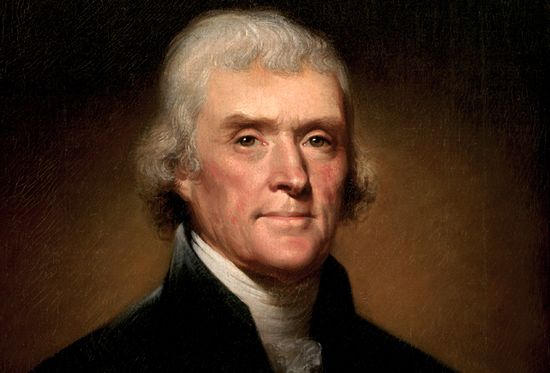 Thomas Jefferson, one of America’s founding fathers, was also the third President of the United States, one who served two election terms, from 1801-1809, and actively pursued new lands for American citizens during the Louisiana Territory disputes of the early 1800’s. Born in 1743, Thomas Jefferson’s birthday is celebrated every year on April 13th.

The first official celebration honoring the birthday of one of our greatest presidents occurred on April 13th in 1830. A fine dinner was held for a Congressional delegation and attended by President Andrew Jackson and other notable leaders. Some of those who had designed the event had intended to use it as an opportunity to profess their political views, but President Jackson but a terse end to such machinations when he rose to propose a toast and said, “Our Federal Union: It must and shall be preserved.” Quiet dissention involving state’s rights ultimately caused all but thirty members in attendance to leave the room, and such was Jefferson’s first national holiday celebrated. In most states today, Thomas Jefferson’s birthday is a legal holiday while in others it is not.

In the early day of the 20th century, Democrats mostly observed the day, but these days, a non-political observance of the day is celebrated in many states, including Virginia, and most especially at the University of Virginia, which Thomas Jefferson founded in 1819. Opening to students in 1825, it was the first university in the United States to offer a full education to students, and was founded around a library rather than a church. His home in Monticello, Virginia, is the site of pomp and ceremonies every year to celebrate the anniversary of his birth and Americans from around the country make a visit to his home every year to honor his memory.

Known as the silent member of Congress during the days of America’s birth, Thomas Jefferson preferred to express his views with his pen rather than his voice. As a young man of only 33 years old, he drafted our American Declaration of Independence and also wrote a bill that established American rights to religious freedom in 1786. A scholar at heart, Thomas Jefferson admired education and sought to provide educational opportunities for all people, and many of his students went on to become famous American’s in their own right, including American poet Edgar Allen Poe.

His face is familiar to every American who touches a nickel, upon whose surface Jefferson’s strong features are imprinted. His face is also forever immortalized in the huge carvings on Mount Rushmore, South Dakota, along with three other great presidents, George Washington, Abraham Lincoln, and Theodore Roosevelt. Battleships are named after him, as are a myriad of libraries and buildings, streets and town squares. Children in schools memorize his preamble to the Declaration of Independence every year, and learn of his presidency and deeds. His writings are voluminous and highly valued, as are his political writings, some of which are displayed in the Smithsonian as well as the Library of Congress. Few presidents have left such an impact or a legacy of the principles of American freedoms as has Thomas Jefferson, and as such, he remains a beloved figure in American history.

Jefferson died on July 4th, 1826, and his epitaph reads, at his own insistence, “Here was buried Thomas Jefferson, author of the Declaration of American Independence, of the Statute of Virginia for religious freedom and the father of the University of Virginia.”

Thomas Jefferson’s birthday is honored every year, an occasion when all Americans can recognize the spirit of freedom and loyalty that was personified by him. It was Jefferson’s writings that founded our nation, and as such, he will be remembered for all time as one of our greatest Founding Fathers.

← What Tie Dye Means
How to Celebrate Steelmark Month →
Scroll Up